I came across an interesting Word document which at first glance definitely looked malicious. It had everything from random variable names to lyrics from Garbage - Run Baby Run in the comments. It also used an uncommon but very cool method for moving from macro to machine code execution.

The macro starts by creating pointers to DLL exports already loaded in memory by Word:

Of note are the function pointers whitworth and bruckenthalia which allows the macro to allocate memory (VirtualAllocEx) with the right permissions, jump to it and execute arbitrary code.

VirtualAllocEx is fairly straightforward in that the macro uses it to return a pointer to a memory block set as RWX (read-write-execute permissions).

The macro can use the first parameter to pass a pointer to an arbitrary function in memory and have it executed on return. According to MSDN:

Walking through the macro execution I can see that the value returned by whitworth is a long integer which translates to a location in memory. Specifically, the address returned by VirtualAllocEx:

Right before calling EnumTimeFormatsW and ultimately transferring control to shellcode, the macro adds an offset of 0xE5D to the address: 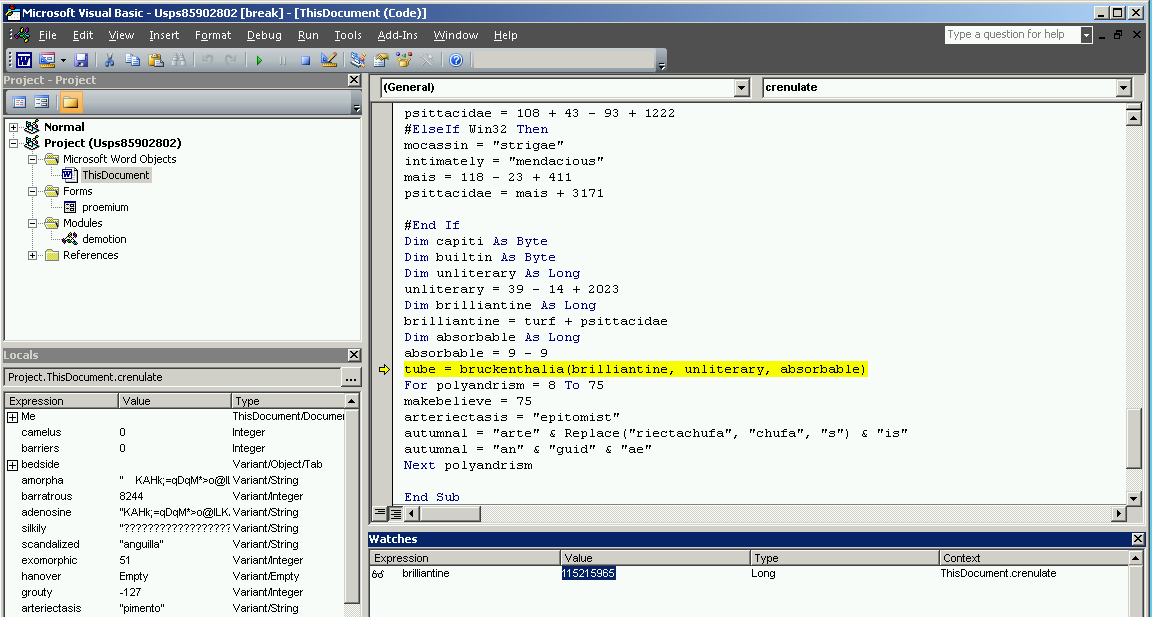 The allocated memory segment with RWX permissions stands out: 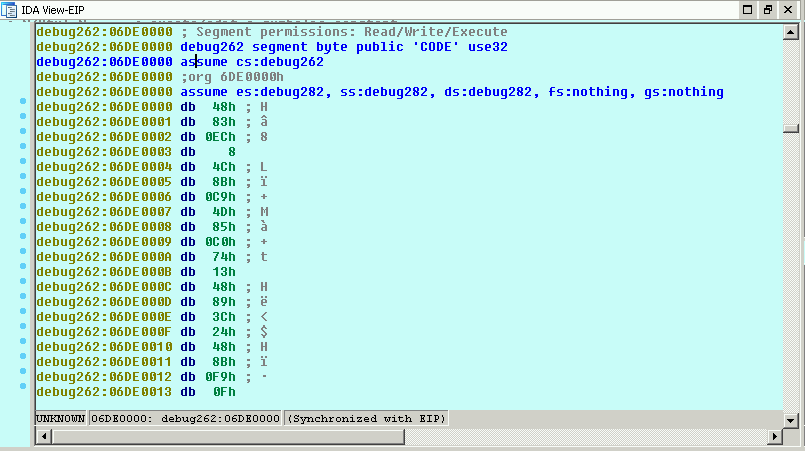 Since the callback function passes in the 0xE5D offset, I can assume at this location there is code and I should be able to disassemble it: 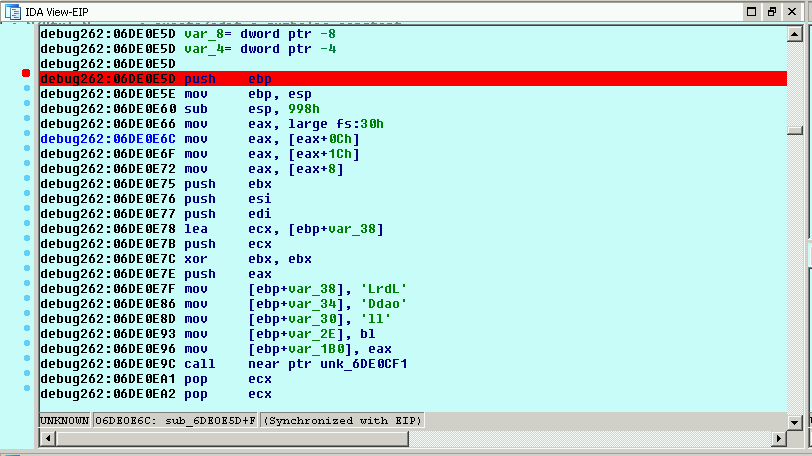 A breakpoint here will allow me to see what this thing is doing once it transfers control from the macro.

To make debugging easier, I can save this section of memory to disk and add it to a shellcode harness. Any executable with a section large enough to hold the size of the shellcode (around 12kb) will suffice: 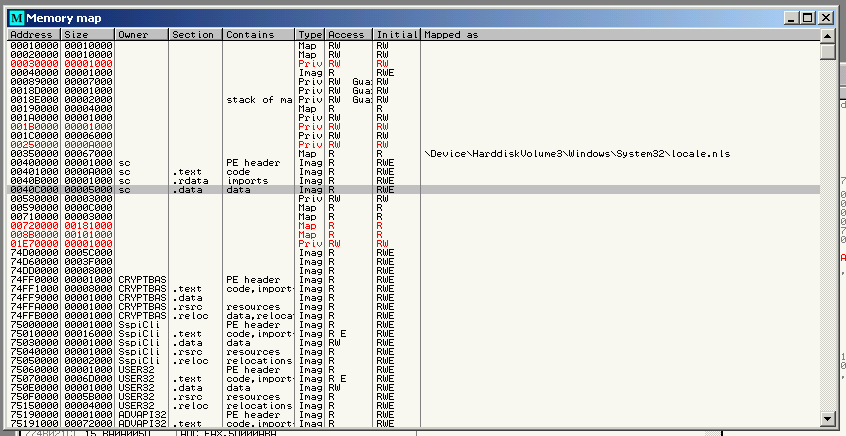 This particular executable (sc.exe) has a .data section large enough to hold the shellcode. I can safely overwrite the whole section with the shellcode and dump the changes using the OllyDumpEx plugin.

The resulting harness executable’s .data section should look something like this: 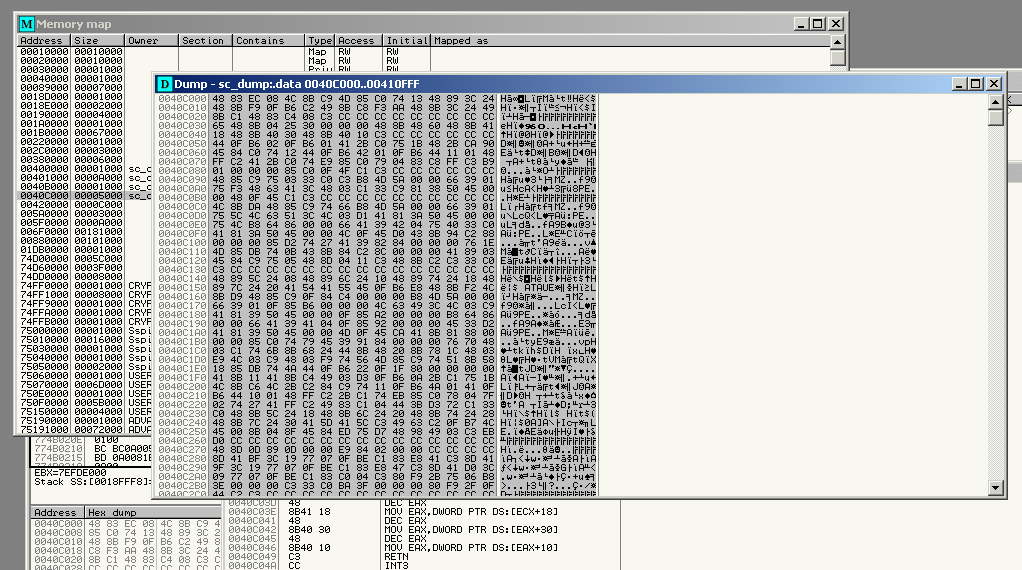 .data can be disassembled and I can see what will become the new entry point for the shellcode harness executable (the location the macro jumps to when transferring control): 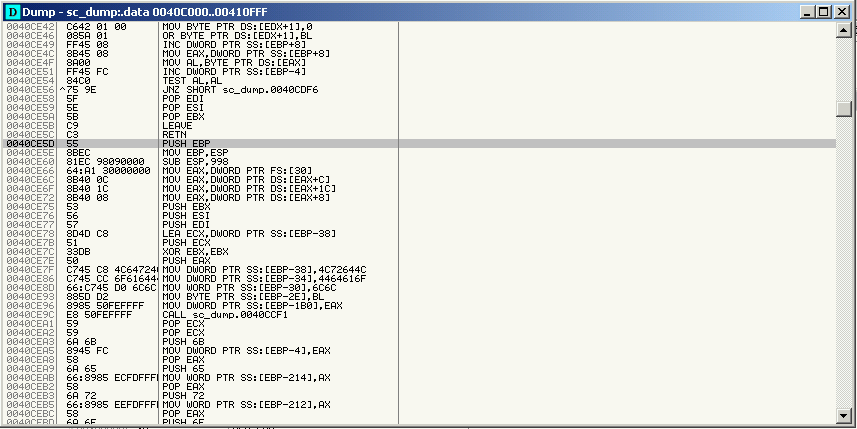 The last step is to modify the PE header for the harness executable and make sure the Entry Point offset is set to 0x0000CE5D. This should land in the .data section right on the shellcode entry point:

IDA should now be able to disassemble the shellcode and I can take a closer look.

The code goes through a great deal of trouble to stealthily load the DLLs it needs and download the next stage.

It’s a good idea to pass Access Violation exceptions from the debugger to the application as they will interfere with the reversing process.

The shellcode first checks for the occurrence of BULLSHIT somewhere in the process memory space. The original document had this embedded and this check would normally pass. The first check is at ESI=0x00001000 for BULL and the second is at ESI+0x4 for SHIT.

I can either add the word in the memory space or set the zero flag after each CMP instruction (EFL=0x00000040): 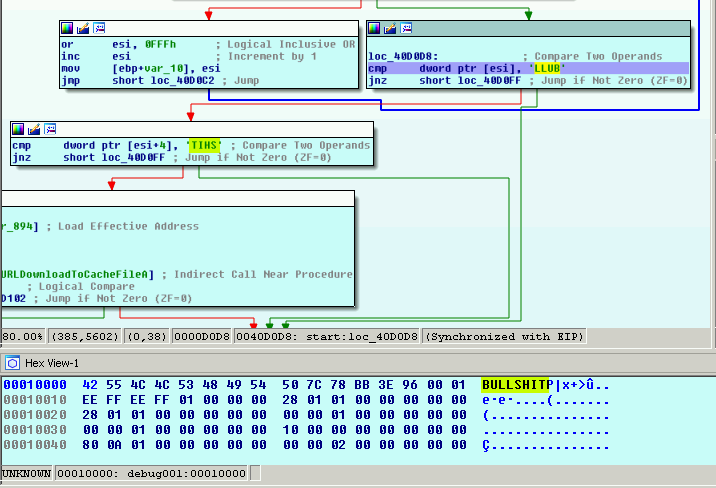 The shellcode continues to laboriously load DLLs, among them urlmon.dll. The URLDownloadToCacheFileA() function from this library is used to download the next stage:

There is also an operating system architecture check: 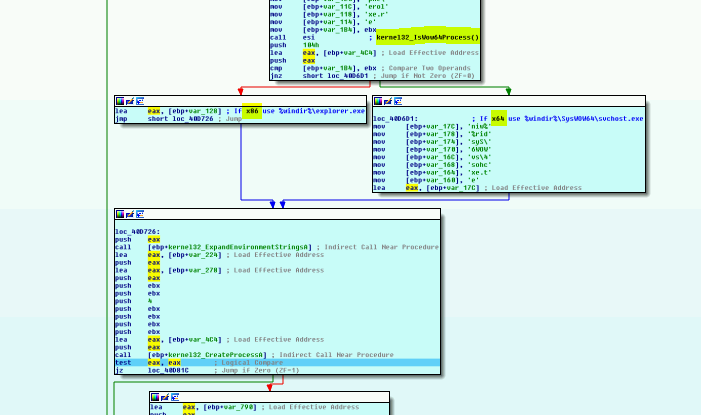 On x64 systems, svchost.exe is executed from the %windir%\SysWow64 folder (32-bit). On x86 systems %windir%\explorer.exe is launched instead.

It looks like the process is started with the CREATE_SUSPENDED (0x00000004) flag, followed by a call to NtUnmapViewOfSection(): 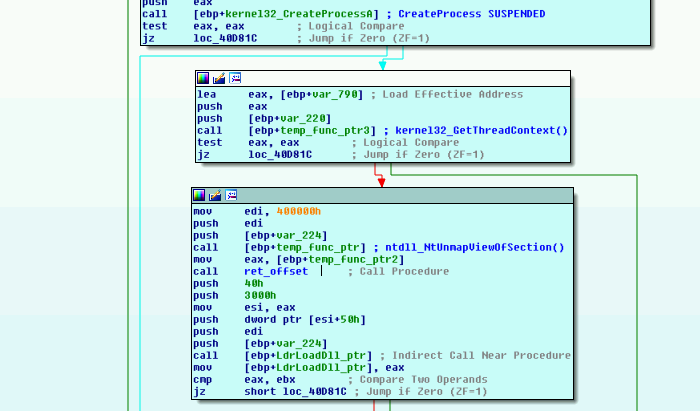 This appears to be a technique called Process Hollowing, in which a common process is launched in suspended mode and its code replaced by attacker code:

In this case more shellcode is injected into the hallowed svchost.exe process. The thread context is adjusted and the thread is resumed, executing malicious code: 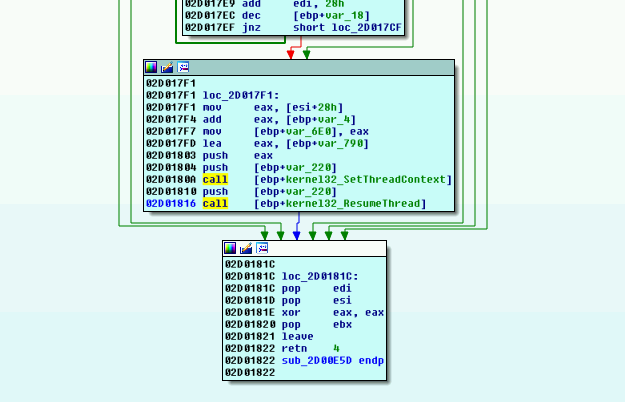 I can attach to the running but suspended svchost.exe process and look for any segments with RWX permission.

…and the process starts all over again :)

There’s lots of other interesting stuff in svchost.exe, including some anti-debug and more C2 hosts.

Callout to get external IP: 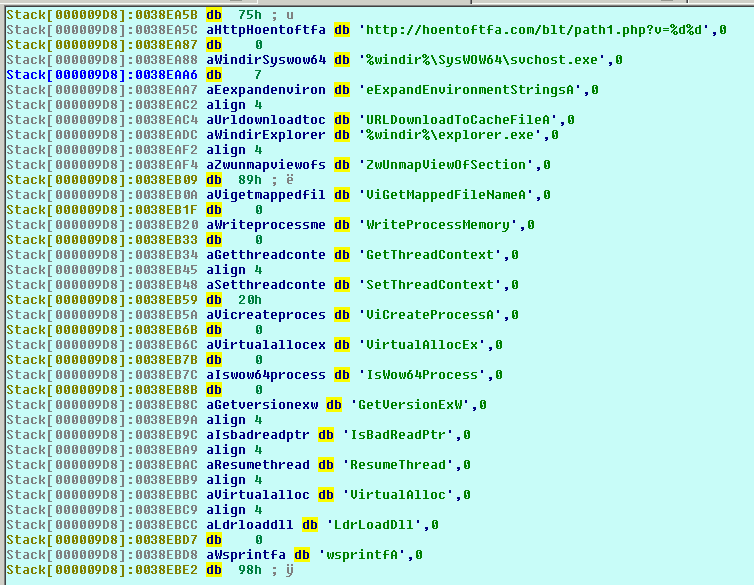